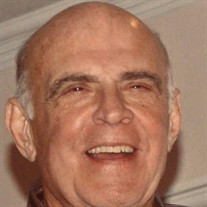 Robert Joseph “Bob” Smith, 83, of Pilot Point, TX, passed away Thursday, October 8, 2020, in Pilot Point, TX. Bob was born December 15, 1936, in Catching, MS, to Fentress and Lucille (Poche) Smith and grew up in Lafayette, LA. He married Betty Weller on August 29, 1959 in Glen Allan, MS. They were married for 61 wonderful years. Everyone he met he told of his love for Betty and always said, “I don’t know what I’d do without that girl! Bob graduated from Vanderbilt University in 1958 with a major in history and economics. After his marriage to Betty in 1959, they lived in Meridan, MS, where he was a salesman for Proctor and Gamble. They moved back to the Mississippi Delta in 1967 after he began losing his sight. Bob surrendered to the ministry in 1972 and preached in several towns in the Mississippi Delta and northeastern Tennessee before moving to Texas in 1989. In addition to leading his home church, he loved traveling throughout the mid south visiting different churches and telling people of the unsearchable reaches of Christ. He was influential on his family and friends by the life he lived and the gospel he preached. And through his preaching he saw many people come to know Christ as his or her Lord and Savior. He was constantly studying scripture and remarkably able to deliver a sermon by memory. He said what he believed whether popular or not! He was an avid sports fan who never missed a game his kids played in whether basketball, football, or baseball. He could recite the stats and history of many players and coaches no matter the teams! A ballgame was usually playing in the background. If he wasn’t studying or watching sports he was probably wheeling and dealing for a new car. He loved to trade cars! Bob also enjoyed movies and musicals, and liked nothing better than singing hymns with gusto no matter where he happened to be! He appreciated good humor and was not above engaging in good natured pranks. Bob was dearly loved by his family and friends, many of whom he led to a knowledge of or a closer walk with God. Now, he is finally face to face with his Lord and Savior, Jesus Christ, and is experiencing first hand all that he taught and believed. Bob is survived by his wife, Betty; sons, Ted Smith and wife, Valerie of Leland, MS, and Randy Smith of Pilot Point, TX; daughters, Amanda White and husband, Sam of Celina, TX, and Elizabeth Bobo and husband, Greg of Frisco, TX; grandchildren, Jeff Watson and wife, Tiffany; Rachael Bowers and husband, Jeff; Grace Watson; Abby Moody and husband, Dillon; Josh Smith and wife, Britany; Taylor Kelly and husband, Read; Jack Bobo and wife, Darby, and Hayden Bobo; great-grandchildren, Mandy Kate, Luke and Mary Katherine Watson, Maddie Smith and Lilah Kelly; sister, Anne Schmidt and husband, Charles of Chattanooga, TN; and niece, Marlene Schmidt. Bob was preceded in death by his parents, Fentress and Lucille Smith; and his sons, Clay Smith and Bob Smith. Visitation will be held 4:00-6:00 PM, Saturday, October 10, 2020, at Mustang Baptist Church in Pilot Point, TX. There will be a second visitation held 3:00-4:00 PM, Monday, October 12, 2020 at Lake Washington Baptist Church in Glen Allan, MS, with a memorial service immediately following officiated by Jeff Parker and Jeff Watson. Online condolences may be shared at www.slaymemorialfuneralhome.com. Arrangements are under the direction of Phyllis Stout and Slay Memorial Funeral Center.

The family of Robert "Bob" Joseph Smith created this Life Tributes page to make it easy to share your memories.