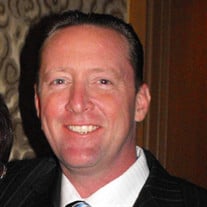 Roger Alan Little (known to all as R. A.), beloved father, son, and brother, passed away Sunday, May 16, 2021 at his home in Denton, TX. He is survived by his two children: son, Hayden Little of Charlottesville, VA and daughter, Hayley Little Nelson (Jake) of Irving, TX; mother, Carma Little of Houston, TX; and sister, Amber Little (Jim Novak) of Houston, TX. R.A. He was preceded in death by his father, Roger Dale Little; maternal grandmother, Lois Nell Wilson Conwell; maternal grandfather, Byron Roger Conwell; and paternal grandmother, Ila Mae Dierks. R.A. Little was born in Houston, TX on December 22, 1971. By the age of 5, the family relocated to Denton, TX and ultimately settled in Pilot Point, TX, where R.A. grew up surrounded by loving friends and family. He was a devoted son and proud father of two children. R.A. worked alongside his father for many years selling band accessories and uniforms and after graduating from University of North Texas he followed this passion working for major band suppliers. Most recently, after his dad’s passing, R.A. took over his father’s business continuing to do what he loved in Denton, TX. He enjoyed his weekly men’s group where he bonded with friends both old and new during their bible studies. He was loved by lifelong friends, many new friends, and of course, his family who loved him dearly. R.A. was known for his joking ways and charming smile. He let it be known to all that he considered his greatest accomplishment in life, of which he was most proud of, to be his children Hayden and Hayley. All who knew him loved him and will miss his entertaining personality that brought smiles to us all. A memorial service will be held at 1:00PM, Saturday, June 12, 2021 at Slay Memorial Chapel in Pilot Point, TX. On-line condolences may be shared at www.slaymemorialfuneralhome.com. Services are under the direction of Terri Slay and Slay Memorial Funeral Center.

Roger Alan Little (known to all as R. A.), beloved father, son, and brother, passed away Sunday, May 16, 2021 at his home in Denton, TX. He is survived by his two children: son, Hayden Little of Charlottesville, VA and daughter, Hayley Little... View Obituary & Service Information

The family of Roger Alan "R. A." Little created this Life Tributes page to make it easy to share your memories.