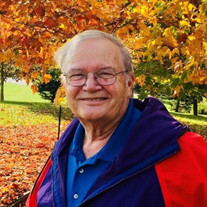 Ronald “Lynn” Keener, 77, of Oak Point, TX, passed away Thursday, September 23, 2021 in Denton, TX. Lynn was born July 28, 1944 in Denver, CO to Fredrick Leroy Keener and Margaret Elaine Brunton. He married Lee Ann Scoles July 17, 1993 in Arlington, TX. Lynn graduated from Wasson High School in Colorado Springs, CO in 1962 where he made All City and All State Lineman, and he had the distinction of being the only interior lineman in the city to score a touchdown in the 1961 season. Interests included field trialing English Setters and golf. He received his bachelor’s degree from Colorado State University in 1967. Lynn was an active volunteer for the 301st Bomb Group WWII website and helped families find information about veterans. He worked as a factory manager for Mars Corporation. He lived in Texas at the end of his life, lived in California for most of his professional life, but always considered Colorado his home. Lynn is survived by his wife, Lee Ann of Oak Point, TX; daughter, Tabitha Sripipatana and husband Alek of Kensington, MD; grandsons, Kaimana and Makoa Sripipatana of Kensington, MD; step-daughter, Melanie Sargent of Oak Point, TX; grandchildren, Hanna and Jake Sargent of Oak Point, TX; and step-son Scott Hallmark and wife Coleen Hallmark of Little Elm, TX. Lynn was preceded in death by his parents, Fredrick and Margaret; brother, Kent Keener; sister, Judy Hudson; and grandson Patrick Hallmark. Arrangements are under the direction of Terri Slay and Slay Memorial Funeral Center.

The family of Ronald "Lynn" Keener created this Life Tributes page to make it easy to share your memories.