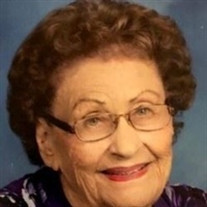 Rosemary "Rosie" Hollar, 94, lifetime Pilot Point resident, died peacefully in her home, Monday, July 23, 2018, surrounded by her family. She was born April 23, 1924 in Pilot Point, TX to Henry and Mary Catherine Henzler. Being a middle child of seven siblings in a hardworking German farming family instilled in her an intense drive and work ethic.  As a youth in Pilot Point, she was active in the St. Thomas CYO where she organized dances and activities for the young. She was also active in organizations at Pilot Point High School, where, as a member of the Pep Club, she cheered on her future husband, Glenn Audrain Hollar. After graduating from High School, the two went on to join the war effort with Glenn joining the US Army Air Corp and she becoming a real life "Rosie the Riveter", building B-24 bombers at American Aviation. She went on to work in accounting for the Atlantic Refinery Co. Rosemary and Glenn married May 8, 1948 at the St. Thomas Aquinas Catholic Church and made their home in Pilot Point where they had six children in a matter of less than four and a half years. She was active in the Church, holding offices in the St. Thomas Mother's Club, serving three years as president of the Altar Society, and was a member of the Parish Council. Her hobbies included gardening, cooking, and volunteering at the Shepherd's Storehouse. She translated her love of gardening into the flower beds at church. Rosemary is survived by daughter, Annette Hunter of Pilot Point, TX, son, Gregory "Pete" Hollar and wife Peggy of Pilot Point, TX, son, Garry Lee Hollar of Pilot Point, TX, daughter, Glenna Hartnett and husband Dick of Eagle Mountain Lake, TX, son, Robert Thomas "Bobby" Hollar and wife Sandra of Pilot Point, TX; grandchildren, Susan Alvord, Cheryl Luther, Greg Hollar, Erin Lewis, John Hartnett, Brady Hollar, Michael Hollar, and Marcus Hollar; 14 great-grandchildren; brother, Henry Henzler Jr. and wife Nadine; sister, Diann Nance and husband Raby; sister-in-law, Alice Henzler; and numerous nephews, nieces, and cousins. She was preceded in death by her husband Glenn; son, James Richard "Dicky" Hollar; grandson Richard Hollar; brothers, Leo Henzler, and Robert Henzler; sisters, Margaret Strittmatter, Marie Henzler, and Delores Luke. Rosary will be prayed at 6:30PM with visitation following until 8:00PM, Wednesday, July 25, 2018 at Slay Memorial Chapel in Pilot Point, TX.  A Mass of Christian Burial will be held at 10:00AM, Thursday, July 26, 2018 at St. Thomas Aquinas Catholic Church in Pilot Point, TX with Fr. John Martin officiating.  Interment will follow at St. Thomas Cemetery in Pilot Point, TX.  Online condolences may be shared at www.slaymemorialfuneralhome.com.  Donations may be made in Rosemary’s memory to The Shepherd’s Storehouse, P. O. Box 826, Pilot Point, TX 76258. She tore down every wall that tried to stop her. Arrangements are under the direction of Terri Slay and Slay Memorial Funeral Center. To send a flower arrangement to the family of Rosemary Hollar, please click here to visit our Sympathy Store.

The family of Rosemary Hollar created this Life Tributes page to make it easy to share your memories.