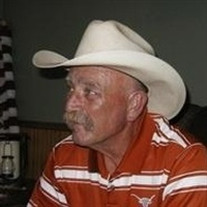 Amarillo born Russell "Rusty" Gene Waldrop, age 67, passed peacefully from this world to enter Heaven's gates on May 27, 2015 in Tioga, Tx. Rusty was born April 29, 1948 and was the eldest of seven children. He was devoted to his wife Linda, whom he married in Clinton, Iowa in 1990. He also loved and delighted in his two granddaughters, Audrey and Abbie Burgess. Rusty moved east from Amarillo at the age of 26 to begin work in the IT field in the metroplex where he was known as a hard-working team player, serving as a programmer and as a systems engineer at EDS where he retired after 32 years. Showing their preference for more of a country lifestyle, he and Linda bought a home and lived in Tioga for thirteen years where they were active members of Tioga United Methodist Church, and at one point owned a Cowboy Décor Shop which featured among other collectables, an assortment of barn-wood picture frames and furniture that he made. Rusty's nicknames reflected his hair color and additionally his interest, as he was also called "Cowboy" by those that knew of his love of horses and of riding. He was an avid fisherman and also enjoyed golf as well as his woodworking hobby. He was a devoted Dallas Cowboy and Texas Longhorn fan. In another post-retirement "career", he for a time became a trucker, driving for Conway Truckload; a profession enjoyed by his father and because of that something Rusty wanted to experience. The little town of Tioga will greatly miss Rusty Waldrop, as will his loving large family, many friends, and former colleagues. Rusty is survived by his loving wife and best friend Linda, with whom a 25 year anniversary would have been celebrated in July; daughter Heather and Dr. Shawn Burgess and granddaughters Audrey and Abbie all of Frisco; two brothers, Michael Waldrop of Amarillo, Terry and wife Lora Waldrop of Littleton, CO; three sisters, Debra and Husband Johnny Marshall of Amarillo, Lisa and husband Dean LaGasse of Sun Valley, CA, Ellen and husband Randy Strickland of Camp Verde, AZ; loving aunts, uncles, many nieces and nephews and numerous friends. Rusty was preceded in death by parents Russell Claude and Virl Gene (Cooke) Waldrop; sisters, Sheryl Nan Hudson and Jodella Susan Waldrop. Visitation will be held 6:00PM-8:00PM, Friday, May 29, 2015 at Tioga United Methodist Church. The funeral service will be held at 10:00AM, Saturday, May 30, 2015 at Tioga United Methodist Church, with Carroll Caddell officiating. Burial will follow at Tioga Cemetery. Online condolences may be shared at www.slaymemorialfuneralhome.com. Memorials may be made to Tioga United Methodist Church Building Fund. The family wishes to extend sincere appreciation to Faith Presbyterian Hospice and Texas Oncology of Denton for their loving care. Services are under the direction of Terri Slay and Slay Memorial Funeral Center, Pilot Point. To send a flower arrangement to the family of Russell Gene Waldrop, please click here to visit our Sympathy Store.

Amarillo born Russell "Rusty" Gene Waldrop, age 67, passed peacefully from this world to enter Heaven's gates on May 27, 2015 in Tioga, Tx. Rusty was born April 29, 1948 and was the eldest of seven children. He was devoted to his wife Linda,... View Obituary & Service Information

The family of Russell Gene Waldrop created this Life Tributes page to make it easy to share your memories.