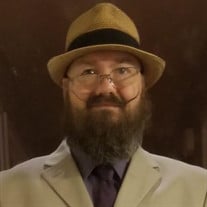 Ryan Harold Latham, 49, of Denton, TX, passed away Saturday, August 21, 2021 in Denton, TX. He was born March 7, 1972 in Mesa, AZ to Robert Edward and Rose Mary (Schweitzer) Latham. Ryan married Stephani Ann Buckalew in Todd Mission, TX on November 1, 2020. Ryan was the firstborn child of Robert and Rose and took his “being the eldest brother” very seriously. He protected and taught his two younger brothers over the years as they grew up. After high school, Ryan joined the United States Navy where he studied to be an engineer on a nuclear submarine. Once he was honorably discharged, he continued his service attitude as he was a volunteer firefighter in several of the places he lived. Ryan’s greatest desire was to have a family and be a father. This desire was fulfilled when his first son, Gabrial was born, followed shortly thereafter by another son, SethRyan. He again demonstrated his love and servant's heart when Gabrial was diagnosed with cancer at 20 months, and then became the primary caregiver for both children, making sure Gabrial made it to his many doctor appointments while also making sure SethRyan never felt the odd child out. Ryan and Stephani knew each other in high school and reconnected in the early days of Facebook, watching each other’s children grow up. This eventually led to a common set of thoughts and experiences, leading to a first date which never ended. Stephani and Ryan married and blended their families (which they referred to as The Brady Bunch) in 2020. Ryan is survived by his wife, Stephani of Denton, TX; mother, Rose Mary Latham of Anna, TX; three sons, Gabrial Latham of Denton, TX, SethRyan Latham of Denton, TX, and Blake Martin of Arlington, TX; daughter, Brittani Birge and husband Brady of Sunset, TX; two grandchildren, Remi Martin and Björn Birge; three brothers, Rory Latham and wife Jennifer of Anna, TX, Reggie Latham and wife Kelly of Elizabeth Town, KY, and Robert "Choppo" Latham of Boyd, TX; and paternal grandmother, Georgia Latham of Boyd, TX. He was preceded in death by his father, Robert Edward Latham. A funeral service will be held at 6:30PM, Wednesday, September 1, 2021 at Slay Memorial Chapel in Aubrey, TX. In lieu of flowers, donations can be made to the Ronald McDonald House (https://www.rmhc.org/donate). Online condolences may be shared at www.slaymemorialfuneralhome.com. Arrangements are under the direction of Terri Slay and Slay Memorial Funeral Center.

The family of Ryan Harold Latham created this Life Tributes page to make it easy to share your memories.