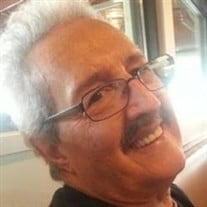 Simon Bolivar Beteta November 2, 1940 - July 17, 2013 Simon was born and raised in New York City to Carlos Beteta & Marina Carbia, their 6th child. His father was from Nicaragua and his mother from Puerto Rico. In 1966, Simon found a personal transformational freedom in Christ Jesus through the ministry of David Wilkerson's Teen Challenge (TC) in Brooklyn, NY. While TC was the vehicle God used to attract Simon, it also became the major focus of his life and ministry for many years. He became a junior counselor in the Brooklyn TC upon completion of the program. In 1968, he met the love of his life, Maria Belen Avila when he travelled to the Bethany College of Missions in Minneapolis, MN to recruit workers for TC. He married Maria on May 2, 1970 in San Antonio, TX after she finished a one year missionary service in Puerto Rico. Simon and Maria had 3 children, John Paul (Tracy), Joseph Simon (Ana Maria) and Lisette Joanne (Jeremy Summers). Simon attended the TC Bible Institute in Rhinebeck, NY graduating in 1972. He received his Ministers License at that time. He took part of his class-room studies at the South Eastern Univ. of New Hampshire from 1978-80, graduating with a BS degree. In 1993 he was ordained by the Assemblies of God. His ordination was kept active throughout his life. Simon became the Program Director at the TC Camp Champion in upstate New York until 1985. He directed the San Antonio TC Center from March, 1985 until 1989. In 1990 he became the Re-Entry Supervisor at the Midland, Texas TC. At a later date he was the Program Director through 1998. Because of serious back problems, he took an early retirement. Even then, Simon continued periodic voluntary work with the Midland TC. His heart for helping disciple and train young men never ceased even when he was physically unable to continue serving. After retirement, he devoted much of his time and energy into their beloved grand-children. Simon is survived by his wife of 43 years, Maria of Savannah, TX, their three children, John Paul, Joseph "Joey" and Lisette Summers, and 8 grand-children: Leighla and Johnathan Beteta, Christian Joseph "CJ", Nicholas "Nico" and Xavier "Xavi" Beteta, Jadyn, Madison and Jason Summers. He is also survived by an older brother, Charlie Beteta in Puerto Rico and many nieces, nephews and in-laws. Simon is preceded in death by his parents and his siblings, Julio, Rosie, Winnie and Albert. The service will be lead by Pastor Mike Hanks of 1st Assembly of God, Midland, TX at the Slay Memorial Funeral Center, Aubrey, TX. Interment will follow at Zion Cemetery in Little Elm, TX. There will be two memorial services following the funeral to celebrate Simon's life with dates and location to be announced. The first will be held in Midland and the second in San Antonio. In lieu of flowers, the family would encourage you to donate to a Teen Challenge ministry of your choice. On-line condolences may be shared at www.SlayMemorialFuneralHome.com. To send a flower arrangement to the family of Simon Bolivar Beteta, please click here to visit our Sympathy Store.

Simon Bolivar Beteta November 2, 1940 - July 17, 2013 Simon was born and raised in New York City to Carlos Beteta & Marina Carbia, their 6th child. His father was from Nicaragua and his mother from Puerto Rico. In 1966, Simon found a personal... View Obituary & Service Information

The family of Simon Bolivar Beteta created this Life Tributes page to make it easy to share your memories.