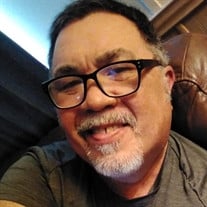 Dennis Steven Conn, 54, of Pilot Point, TX, passed away Wednesday, September 29, 2021 in Frisco, TX. Steven was born September 14, 1967 in Okinawa, Japan to Dennis Conn and Hideko Hayaski. Dennis married Melissa Conn on April 22, 2000, in Elkhart, TX. Steven was raised in Elkhart where he graduated in 1985. Steven attended Texas Wesleyan University earning an Associate’s degree. He and Missy moved to Pilot Point, TX in 2004 where they attended Midway Church and made many friends. Steven worked for Upper Trinity Water for the last five years as a Water Specialist. Steven was a family man who invested his whole heart into spending time with them. Whether he was playing basketball, attending baseball games, or showing their pigs at the stock shows he made a point of making happy memories that he will leave with his family. Steven had a handshake or a smile for his friends and was always willing to lend a helping hand. He was a man of many talents but his most memorable being how proud he was of his children and how he loved Missy. Despite Steven’s short time on earth, he was deeply loved and brought joy to those around him. He will be remembered fondly by those who knew and loved him, and they will never forget his smile. Steven is survived by his loving wife, Missy Conn of Pilot Point, TX; parents, Dennis and Hideko Conn of Elkhart, TX; sons, Mikael Conn and William Conn both of Pilot Point, TX; and daughter, Elizabeth Ann McDaniels and husband Jeremy of Tioga, TX. Visitation will be held 6:00PM-7:00PM, Tuesday, October 5, 2021 at Midway Church in Pilot Point, TX. A funeral service will follow with Rev. John Theisen officiating. Online condolences may be shared at www.slaymemorialfuneralhome.com. Arrangements are under the direction of Charlotte Chism Waldrum and Slay Memorial Funeral Center.

The family of Steven Conn created this Life Tributes page to make it easy to share your memories.