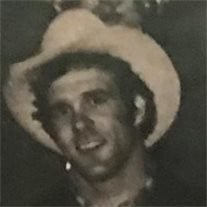 James Taylor Webb, also known as “Dad,” “Pop,” “Coach,” and “Bowie,” 70, of Decatur, TX, passed away Tuesday, July 2, 2019, in Decatur. He was born July 29, 1948, in Austin, TX, to James and Doris (Taylor) Webb. Taylor married Teresa Parrish on April 10, 1976, in Bridgeport, TX. Taylor is survived by his wife, Teresa, of Decatur, TX; two sons, Jarrett Webb of Weatherford, TX, and Blaine Webb of Houston, TX; granddaughter, Taylor June Webb; brother, Tracy Hall of Wylie, TX; nieces Jessica Estrada and Rachel Tyson; and nephews Jason Friesen, Justin Friesen and Zane Tyson. He was preceded in death by his parents, James and Doris; and sister, Karen Friesen. Taylor was a family man, fiercely protective of his wife of 43 years and his sons, and was their steadfast rock in troubled times. Professionally, Taylor was a wrestling coach and teacher in Plano, TX for nearly 40 years and started the wrestling program at Plano Senior High School. He was known for his strong and steady, yet fair, discipline and demanded his wrestlers show respect to others. He was quoted many times as saying, “Boys, you may mess up a test and get a bad six weeks grade, but there is no excuse for poor behavior in class.” Probably his greatest gift as a coach was not his win/loss record, but rather his ability to seek out kids who were losing themselves and giving them a place to find structure. This changed the lives of numerous boys, allowing them to become better men, husbands and fathers. As a father, Taylor taught his boys the same way -- Be respectful of others, stand up for what they thought was right and work hard to achieve the goals they set for themselves. He would often sacrifice time away from his personal hobbies to coach and teach his boys to have a great work ethic. Taylor has been described as a world class competitor, whether in wrestling, baseball, or golf, but his favorite sport was rodeo. He competed successfully as a CRA, IRA and PRCA steer wrestler, and then as a team roper later in life.While competing only part-time in bull dogging, he was able to win numerous rodeos and jackpots. Including 10 Texas Circuit Finals qualifications, the Mesquite Rodeo Year-End champ multiple times, where his boys also learned to be world class competitors in the calf scramble. He won the West of the Pecos Rodeo, and also came out first in the last Byron Walker Skeeter Memorial Bulldogging. He also won numerous team roping jackpots along the way. The friendships and memories he cultivated through these times were some of his most cherished. Visitation will be held 5:00 to 7:00 PM, Sunday, July 7, 2019, at Slay Memorial Chapel in Aubrey, TX. A funeral service will be held at 2:00 PM Monday, July 8, 2019, at Denton Bible Church Chapel in Denton, TX, with Pastor Tommy Nelson officiating. Interment will follow at Oaklawn Cemetery in Decatur, TX. Online condolences may be shared at www.slaymemorialfuneralhome.com. In lieu of flowers, donations may be made to the Cal Farley Boys Ranch or the Justin Cowboy Crisis Fund. Arrangements are under the direction of Phyllis Stout and Slay Memorial Funeral Center.

The family of Taylor Webb created this Life Tributes page to make it easy to share your memories.