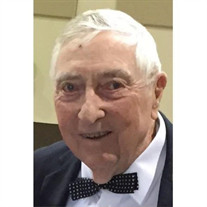 Wayne Edward Cox passed, peacefully, the morning of April 15, 2021, in Dallas, TX, surrounded by family and loved ones. His love for his family and friends, classmates, coworkers, and the community of Panhandle were only surpassed by his love... View Obituary & Service Information

The family of Wayne Edward Cox created this Life Tributes page to make it easy to share your memories.